Actress Candace Cameron Bure was born Candace Helaine Cameron on April 6, 1976 in Panorama City, California, the daughter of Barbara and Robert Cameron. She was the youngest of four children. She belongs to Scottish, English, distant Dutch and German descent. She is best known for the role of D. J. Tanner, the eldest daughter, on the television series Full House which she played from ages 10 to 18. Bure began the most prominent role of her career in 1987 on the ensemble sitcom Full House, as Donna Jo “D.J.” Tanner, the oldest daughter. The long-running series ended in 1995, and she was a member of the cast during its entire run. She Has three children with husband Valeri Bure: Natasha Bure, Lev Valerievich Bure and Maksim Valerievich Bure. Bure is with the height 5 feet 2 inches in tall. She wears a size 7 shoe and her zodiac sign is Aries. 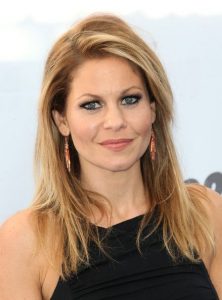 Candace Cameron Bure Education:
Nevada Avenue Elementary School
Chatsworth High School in Chatsworth, California
*She attended Chatsworth High School in Chatsworth, California with Lori Beth Denberg and Lindsay Sloane.
*She attended Nevada Ave Elementary School in West Hills, California. When Full House (1987) began, her teachers were often invited to attend tapings of the show. She spoke at her graduation in the spring of 1988 and received a roaring ovation from the families gathered.

Candace Cameron Bure Facts:
*She is of Scottish, English, German, and distant Dutch ancestry.
*She was number 100 on VH1’s The Greatest: 100 Greatest Kid Stars (2005).
*Following the footsteps of her older brother, Kirk Cameron she began her career by acting in various commercials.
*Follow her on Twitter, Facebook, Pinterest and Instagram.