Cansu Dere is a Turkish actress, model and beauty queen who was the 2000 runner up for Miss Turkey. Dere is known for her roles in television, such as Metro Palas, Güz Yangını, Sıla, Ezel, Muhteşem Yüzyıl, Anne, Şahsiyet, Ferhat ile Şirin, and Sadakatsiz, and in the films Son Osmanlı Yandım Ali, Acı Aşk, El Yazısı, and Behzat Ç. Seni Kalbime Gömdüm. She was awarded the Best Actress at the Stars of the Year Awards organized by Yildiz Technical University 17th time in 2019. 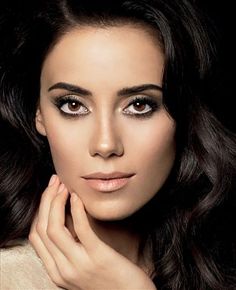 Born on October 14, 1980 in Ankara, Turkey, Dere’s family were Turkish immigrants from Bulgaria and Greece. She has a brother named Arda Dere. Dere graduated from the department of Archaeology at Istanbul University and started modeling after leaving for a year after studying for a year.

Cansu Dere Facts:
*She was born on October 14, 1980 in Ankara, Turkey.
*She graduated from Istanbul University with a degree in archaeology.
*She was the 2000 runner up for Miss Turkey.
*She made her debut in both cinema and television at the beginning of 2004.
*She was chosen “Woman of the Year” by GQ Turkey in 2016.
*Visit her official website: www.cansudere.org
*Follow her on Facebook and Instagram.