Tuba Buyukustun is a Turkish actress. She is best known for television roles as Hasret on Gonulcelen, Elif Denizer on Kara Para Ask, Filiz Tekiner on Ihlamurlar Altında, Asiye “Asi” Kozcuoğlu on Asi, and Sühan Korludağ on Cesur ve Güzel. Buyukustun also played the title character in the TV movie Gulizar and starred as Neval in the 2016 film Istanbul Kirmizisi. Throughout her career, Buyukustun has earned Best Actress honors at the DiziFilm.com Oscars, the TelevizyonDizisi.com Awards, and the AyakliGazete.com Television Stars of the Year Awards. 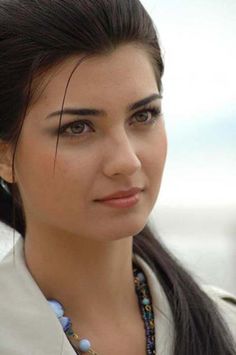 Born Hatice Tuba Büyüküstün on July 5, 1982 in Istanbul, Turkey, to parents Handan and Serdar Büyüküstün, she is of Greek descent on her father’s side, and of Crimean (Russian) descent on her mother’s side. Buyukustun did her schooling from Dogus High School and studied costume design and set decoration at Istanbul’s Mimar Sinan Fine Arts University. She got her first acting gig in 2003 Turkish Channel D series called Sultan Makami. On July 28, 2011, Tuba married the Turkish actor and filmmaker Onur Saylak in Paris, France. In January 2012, she gave birth to twin girls, Maya and Toprak. The couple got divorced on June 5, 2017.

Tuba Buyukustun Facts:
*She was born on July 5, 1982 in Istanbul, Turkey.
*She made her television debut in 2003 on the last four episodes of Sultan Makamı, directed by Aydın Bulut and broadcast on Channel D.
*She made her theatrical film debut in the 2005 drama movie, Babam ve Oğlum.
*One of Turkey’s most popular and highest-paid actresses.
*She dated Kurdish actor Bulent Inal from 2005 to 2007.
*Her hobbies include painting, horse riding, sculpting, driving cars and skiing.
*She became a goodwill ambassador of UNICEF Turkey in 2014.
*Visit her official website: www.tubabuyukustun.com.tr
*Follow her on Twitter, Facebook and Instagram.