Gaspard Ulliel is a French actor and model. He is best known for his portrayal of serial killer Hannibal Lecter in Hannibal Rising, and for his role as fashion mogul Yves Saint Laurent in the biopic Saint Laurent. He is also notable for being the face of the Chanel men’s fragrance Bleu de Chanel. Ulliel has also starred in such film as A Very Long Engagement, Strayed, The Princess of Montpensier, To the Ends of the World, Summer Things, The Dancer, Eva, and It’s Only the End of the World. 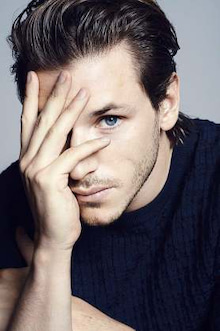 Born on November 25, 1984 in Boulogne-Billancourt, France, to parents Serge and Christine Ulliel, he has a sister named Lisa. Gaspard did his schooling from the lycée (French high school) and attended the University of Saint-Denis, where he studied cinema. He has been in a relationship with French model and singer Gaëlle Piétri, since 2013. They have a son together. He previously dated Cécile Cassel, Charlotte Casiraghi, and Jordane Crantelle.

Gaspard Ulliel Facts:
*He was born on November 25, 1984 in Boulogne-Billancourt, France.
*His scar on his left cheek is the result of a doberman’s attack when he was 6.
*He began acting while he was still at school, appearing in Une Femme En Blanc, a film for French television.
*He majored in cinema at the University of Saint-Denis.
*He was voted #12 in Elle (France) Magazine’s “15 Sexiest Men” poll in 2007.
*Tarkowski, Truffaut, Godard, Rohmer, Chris Marker, João César Monteiro, Gregg Araki and Michael Cimino are his favourite directors.
*He enjoys listening to: Reggae, Jazz, Rap, Soul, Rock, Kanye West, Herbie Hancock, The Temptations, Nick Drake, The Stones and Prince.
*He is a fan of Sufjan Stevens and Prince.
*He is close friends with actress Audrey Tautou.
*He owns a Vespa and a Triumph Bonneville Thruxton motorbike.
*He dated French actress Cécile Cassel from 2005 to 2007.
*He had a brief relationship with Charlotte Casiraghi in 2007.
*He dated Jordane Crantelle from 2008 to 2013.
*He is the current face of Longchamp, a French leather and luxury goods company, along with Kate Moss.