Carey Lowell is an American actress and former model. She is most widely known for her role as Assistant District Attorney Jamie Ross in the television drama Law & Order (1996–2001). She played recurring role as Christine Caseman on Six Degrees. Lowell’s film credits include Down Twisted, Licence to Kill, The Guardian, Me and Him, and Fierce Creatures. Born Carey Evelyn Lowell on February 11, 1961 in Huntington, New York, she is the daughter of geologist James Lowell. Carey spent her childhood in Libya, Holland, France, Virginia, and Texas. After living in several countries, she moved to New York City to pursue modeling, and modeled for Ralph Lauren and Calvin Klein. She also appeared on the covers of the most important fashion magazines. She made her film debut in Club Paradise (1986). She has been married three times and is the parent of two children: Hannah and Homer James. 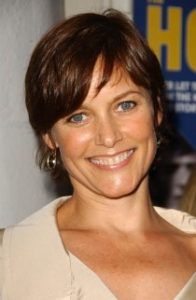 Carey lowell Facts:
*She was born on February 11, 1961 in Huntington, New York, United States.
*Her father James David Lowell was a geologist.
*She was rised in Libya, France, Holland, Virginia, and Texas.
*She was educated at Bear Creek High School, University of Colorado at Boulder, and New York University.
*She has been married three times and had a daughter, Hannah with her former husband, Griffin Dunne, and a son with her third husband, Richard Gere.
*Visit her official website: www.carey-lowell.com