Minako Honda was a Japanese idol and singer who became famous in the mid to late 1980s for her sexy fashion and live performances. She is best remembered for her pop music albums, M’ Syndrome, Midnight Swing and Wild Cats. Minako’s single “Tsubasa” (Wings) is famous for the “long note” that she holds for 30 seconds. She also sang theme songs for several anime programs. Born Minako Kudō on July 31, 1967 in Tokyo, Japan, to Mieko Kudo, she grew up in Asaka, Saitama. Minako took formal acting and singing lessons, and became a notable theatrical singer and actress. She was diagnosed with acute myelogenous leukemia on January 5, 2005. She died of acute myeloid leukemia at the age of 38, on November 6, 2005 in Minato, Tokyo. 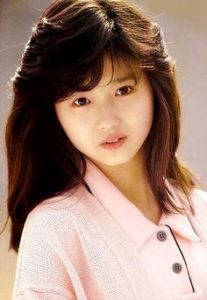 Minako Honda Facts:
*She was born on July 31, 1967 in Tokyo, Japan.
*She was raised in Asaka, Saitama.
*She originated the role “Kim” for Japan version of Cameron Mackintosh musical “Miss Saigon”.
*She was often compared to American singer-songwriter Madonna.
*Towards the end of her life, she released several classical albums that showcased her talent as a classical soprano and included renditions of “Ave Maria” and “Amazing Grace.”
*Visit her website: www.minako-channel.com