Carly Fiorina is an American businesswoman and political figure who is known primarily for her tenure as CEO (Chief Executive Officer) of Hewlett-Packard (HP). In April 2012, Fiorina became Chair of the philanthropic organization Good360. She ran unsuccessfully for the U.S Senate in 2010 and the Republican presidential nomination in 2016. Born Cara Carleton Sneed on September 6, 1954 in Austin, Texas, to parents Madelon Montross Juergens and Joseph Tyree Sneed, she was raised Episcopalian. She is the middle child of three and has an older sister named Clara and a younger brother named Joseph Tyree Sneed III. Fiorina earned a B.A. in Medieval History and Philosophy from Stanford University, an M.B.A. from the University of Maryland and a M.S. from M.I.T.’s Sloan School of Management. Fiorina began her business management career as an executive with AT&T in 1980. In May 1985, she married Frank Fiorina. She was previously married to Todd Bartlem from 1977 to 1984. She has two step-daughters, Traci and Lori, and two grandchildren. 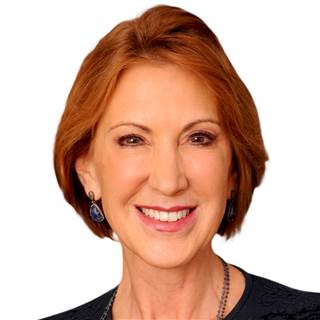 Carly Fiorina Facts:
*She was born on September 6, 1954 in Austin, Texas, USA.
*She was named after her paternal grandmother, Cara Carleton, and her sister was named after their maternal grandmother, Clara Hall.
*She was educated at Stanford University, University of Maryland, and Massachusetts Institute of Technology.
*In 2009, Fiorina was diagnosed with breast cancer and underwent a double mastectomy.
*She was an adviser to Republican Senator John McCain’s 2008 presidential campaign.
*She won the California GOP Senate primary on June 8, 2010.
*She lost United States Senate election to Barbara Boxer on November 2, 2010.
*She ran for the Republican Party’s nomination of President of the United States in 2016.
*Visit her official website: www.carlyfiorina.com
*Follow her on Twitter, Facebook and Instagram.