Carmen Ejogo is a British television and movie actress and singer. She is best known for her roles in the films Love’s Labour’s Lost, What’s the Worst That Could Happen?, Away We Go, The Purge: Anarchy, It Comes at Night, Sparkle, Alex Cross, and Alien: Covenant. As a singer, she has collaborated with several artists in the 1990s. She wrote and sang lead vocals on the song “Candles” by English drum ‘n’ bass DJ Alex Reece. She also sang vocals for the 2000 film Love’s Labour’s Lost. She was a presenter for the children’s series Saturday Disney (1990). Born Carmen Elizabeth Ejogo on October 22, 1973 in Kensington, London, into a Nigerian Igbo family, her parents are Elizabeth Douglas and Charles Ejogo. She is of Nigerian descent on her father’s side, and of Scottish descent on her mother’s side. She has a younger brother: British entrepreneur Charles Ejogo. She attended the Oratory Roman Catholic Primary School and Glendower Preparatory School, and graduated from Godolphin and Latymer School in Hammersmith, London. She married actor Jeffrey Wright in 2000, and the couple had a son named Elijah and a daughter named Juno before getting divorced in 2014. She was previously married to music producer Tricky. 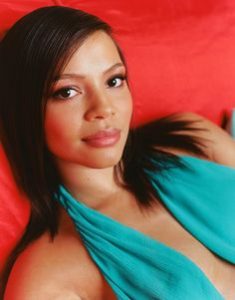 Carmen Ejogo Facts:
*She was born on October 22, 1973 in Kensington, London, UK
*She was born to a Scottish mother and a Nigerian father.
*She is the founder of her own show, “The Carmen Ejogo Video Show” which was aired on BSB’s Power Station channel.
*She is a member of Mensa International, the largest and oldest high IQ society in the world.
*She currently lives in Brooklyn, New York City.
*Follow her on Twitter, Facebook and Instagram.