Carmit Bachar is an American singer, model, dancer, actress and showgirl. She is best known as a member of the American pop girl group and dance ensemble The Pussycat Dolls which achieved worldwide success with number-one singles “Don’t Cha”, “Stickwitu”, “Buttons”, and their multi-platinum debut album PCD (2005). She is also notable for being half of the electropop duo LadyStation. In February 2017, Bachar released her first official single “It’s Time” under her stage name “Carmit”. She has also appeared in such films as 13 Going on 30, Along Came Polly, The Scorpion King and 2003’s Charlie’s Angels: Full Throttle featuring the Pussycat Dolls. Born Carmit Maile Bachar on September 4, 1974 in Los Angeles, California, she is of Jewish Israeli descent on her father’s side, and of Indonesian, Dutch and Chinese descent on her mother’s side. She is married to longtime partner Kevin Whitaker with whom she has a daughter named Keela Rose. 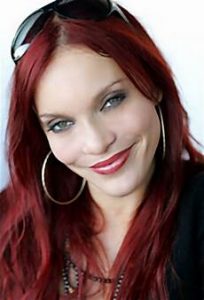 Carmit Bachar Facts:
*Born on September 4, 1974 in Los Angeles, California, she is of Israeli, Indonesian, Dutch, and Chinese decent.
*Studied music, dance, piano and viola at Hamilton Academy of Music in Los Angeles.
*She reached the Olympic trials as a rhythmic gymnast in 1992.
*She joined the American girl group and dance ensemble, The Pussycat Dolls in 1995.
*She was named one of FHM’s Top 100 Sexiest Women in the World in 2008.
*She is longtime friends with Gwen Stefani.
*An avid philanthropist, she is a Smile Ambassador for Operation Smile and is active with her own charity “Smile With Me” for the benefit of Operation Smile.
*Follow her on Twitter and Instagram.