Diego Maradona was an Argentine professional footballer and manager who is widely considered to be one of the greatest footballer of all time. Maradona was one of the two joint winners of the FIFA Player of the 20th Century award. He won the World Cup in Mexico in the year of 1986. Born Diego Armando Maradona on October 30, 1960 in Lanús, Buenos Aires, Argentina, to parents Dalma and Diego Maradona Sr., he received his first soccer ball as a gift at age three and quickly became devoted to the game. Maradona started his career at Argentinos Juniors and played his first game for Argentina in 1977. On November 25, 2020, Maradona died of a heart attack at his home in Tigre, Buenos Aires, Argentina at the age of 60. 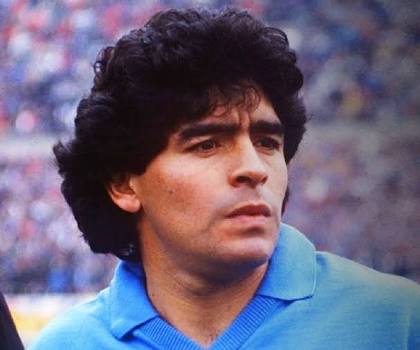 Diego Maradona Facts:
*He was born on October 30, 1960 in Lanús, Buenos Aires, Argentina.
*At age 3, Maradona received his first soccer ball as a gift.
*He started his career at Argentinos Juniors and played his first game for Argentina in 1977.
*He appeared in 91 international matches for Argentina National Football Team and scored 34 goals.
*At age 25, he was the main figure of Argentina’s drive to its 1986 World Cup.
*He won Serie A with Napoli in 1987 and 1990 as well as the UEFA Cup in 1989.
*He scored 81 goals in 188 appearances for Napoli between 1984 and 1991.
*He won the Footballer of the Year of Argentina award in 1979, 1980, 1981 and 1986.
*He scored both of Argentina’s goals in the quarterfinals of the 1986 World Cup against England. The first goal was an unpenalized handling foul known as the “Hand of God”.
*He was the coach of Argentina’s national football team from 2008 to 2010.
*He was named in the FIFA World Cup All-Time Team in 1994.
*He wore the number 10 jersey in the teams where he played.
*Singer Manu Chao dedicated his song “La vida tómbola” to Maradona.
*He was good friends with Cuban leader Fidel Castro.
*He had a tattoo of ‘Ernesto Che Guevara‘ on his right arm.