Carrie Brownstein is an American singer, guitarist, actress, writer, director, and comedian. She first achieved fame as a member of the band Excuse 17 and co-founded the rock trio Sleater-Kinney. During a long hiatus from Sleater-Kinney, Brownstein formed the group Wild Flag. She wrote and appeared in the sketch comedy series Portlandia starring Carrie and Fred Armisen. Born Carrie Rachel Brownstein on September 27, 1974 in Seattle, Washington, she grew up in Redmond, Washington. Her parents divorced when she was age 14, and she was raised by her father. She has a younger sister. Brownstein attended Lake Washington High School and The Overlake School. In 1997, she graduated from Evergreen with an emphasis on sociolinguistics. 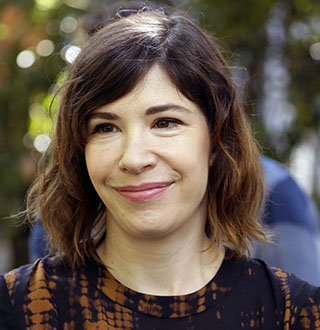 Carrie Brownstein Facts:
*She was born on September 27, 1974 in Seattle, Washington, USA.
*Her father was a corporate lawyer, and her mother was a housewife and a teacher.
*She started playing guitar at 15 and received lessons from Jeremy Enigk.
*At age 24, she worked as a substitute teacher.
*She owns a Rickenbacker 360, and a Gibson SG ’72 reissue.
* In 2010, she stated that she is bisexual.
*Visit her official website: www.sleater-kinney.com
*Follow her on Twitter and Instagram.