Casey Neistat is an American YouTuber, filmmaker and vlogger who co-founded the multimedia company Beme, which was later acquired by CNN. In 2018, Casey founded 368, a creative space for creators to collaborate. He is also a writer, director, and star of the HBO series The Neistat Brothers. Casey won the John Cassavetes Award at the 2012 Independent Spirit Awards for producing the film Daddy Long Legs and won a Streamy Award for Best First Person Series in 2016. Born Casey Owen Neistat on March 25, 1981 in New London, Connecticut, to parents Amy and Barry Neistat, his siblings are Dean, Jordan and Van. He created his self-titled YouTube channel in February 2010 and started posting daily vlogs on YouTube on March 26, 2015. Since December 29, 2013, he has been married to Candice Pool. He has three children, Owen, Francine and Georgie. 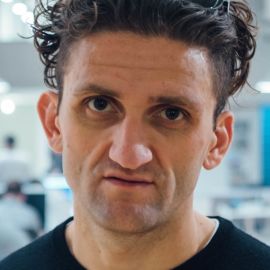 Casey Neistat Facts:
*He was born on March 25, 1981 in New London, Connecticut, USA.
*He started posting daily vlogs on YouTube on March 26, 2015.
*He used to work as a dishwasher in a seafood restaurant and was a bike messenger in New York City.
*He co-founded the multimedia company Beme in 2015 and sold it to CNN in 2016.
*He supported Democrat Hillary Clinton in the 2016 United States Presidential Election.
*When he was seventeen he had a son, Owen, with his then girlfriend Robin.
*Visit his official website: www.caseyneistat.com
*Follow him on Twitter, YouTube, Facebook and Instagram.