Casper Ruud is a Norwegian professional tennis player who achieved a career-high singles ranking of World No. 11 on 16 August 2021, and a doubles ranking of world No. 133 on 12 July 2021. Turning professional in 2015, Ruud became the first Norwegian to win an ATP title and to reach the semifinals of ATP Tour Masters 1000 events. He reached the quarter-final of the doubles event at the 2021 Wimbledon Championship. 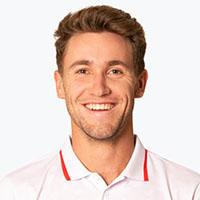 Casper Ruud Facts:
*Born on December 22, 1998 in Oslo, Norway, he is the son of former pro-tennis player Christian Ruud.
*He started hitting tennis balls at the age of four.
*He turned professional in 2015.
*His tennis idol is Rafael Nadal.
*Also an avid golfer, Ruud runs a separate Instagram page to show off his golfing skills.
*Visit his official website: www.casper-ruud.com