Cee Lo Green is an American singer, songwriter, rapper, record producer, and actor. Green first gained recognition as a member of the Southern hip hop group Goodie Mob. He was part of the soul duo Gnarls Barkley, with record producer Danger Mouse, whose hit song “Crazy” peaked at No. 1 on various singles charts worldwide, including the UK and USA. His song “Forget You” reached at #2 on the U.S. Billboards in 2010. He was a judge and coach on the NBC talent show The Voice from 2011 to 2014. Born Thomas DeCarlo Callaway on May 30, 1975 in Atlanta, Georgia, USA, to Sheila J. Tyler-Callaway and Thomas Burton, both of his parents were ordained ministers, and he started his music career in church. His father died when CeeLo was two years old, and his mother died when he was eighteen years old. He graduated from Riverside Military Academy high school, a boarding school in Georgia. He has a son with his former wife, Christina Johnson. 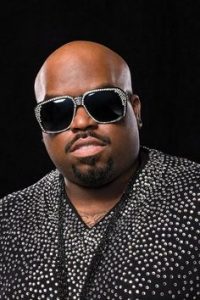 Cee Lo Green Facts:
*He was born on May 30, 1975 in Atlanta, Georgia, USA.
*His parents were ordained ministers.
*He co-founded Goodie Mob with Khujo, Big Gipp, and T-Mo.
*He was part of a duo called Gnarls Barkley along with DJ Danger Mouse.
*In 2012, he won the NAACP Image Award for Outstanding Male Artist.
*His autobiography ‘Everybody’s Brother’ was released in September 2013.
*Visit his official website: www.ceelogreen.com
*Follow him on Twitter, YouTube, Facebook and Instagram.