Evan Glodell is an American film director, producer, writer, and actor. He is best known for directing the indie microbudget film Bellflower. Prior to the release of Bellflower, he directed, wrote and starred in the Boss of the Glory that aired on Stim-TV network. Glodell also directed the 2009 music video Let Me Up by Cursive. Born in Baraboo, Wisconsin, USA, Glodell briefly attended the University of Wisconsin Milwaukee before dropping out to pursue a career in filmaking. He was in a five-year relationship with actress Olivia Taylor Dudley. 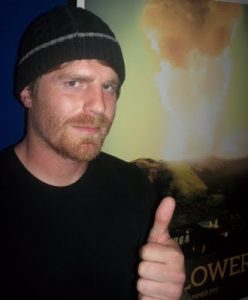 Evan Glodell Facts:
*He was born in Baraboo, Wisconsin, USA.
*He made his filmmaking debut with micro-budget breakout “Bellflower”.
*He is a member of Coatwolf Productions, an assemblage of crew members and actors that work on all of Glodell’s projects.
*Follow him on Twitter.