Kim Clijsters is a retired Belgian professional tennis player, who is a former world No. 1 in both singles and doubles. Turning professional in August 1997, she won 41 WTA singles titles and 11 WTA doubles titles, including four Grand Slam singles titles: three at the US Open, in 2005, 2009, and 2010 and one at the Australian Open in 2011. Born Kim Antonie Lode Clijsters on June 8, 1983 in Bilzen, Belgium, her mother, Els Vandecaetsbeek, was a professional gymnast and her father, Lei Clijsters, was a professional soccer player. She has one younger sister named Elke. She was introduced to tennis at an early age and turned professional in 1997. She won her first Grand Slam singles title at the 2005 US Open. She is married to Brian Lynch, a retired American professional basketball player, with whom she has a daughter, Jada, and a son, Jack. 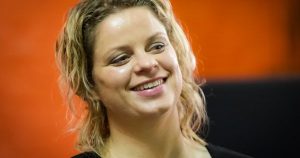 Kim Clijsters Facts:
*She turned professional in August 1997.
*She was ranked #1 in the world in singles and doubles at the same time in 2003.
*After retiring in 2007, Clijsters returned in 2009 to win 3 of her 4 career Grand Slam singles titles.
*She won the Australian Open in 2011, defeating Li Na.
*She was once engaged to WTA tennis player Lleyton Hewitt.
*Visit her official website: www.kimclijsters.com
*Follow her on Twitter, Facebook and Instagram.