Cesc Fabregas is a Spanish professional footballer who plays for Ligue 1 club Monaco. He plays as a central midfielder. He led Spain to multiple championships in international competition. He served as a key member of the Spanish teams that won Euro 2008 and 2012 and the 2010 World Cup. Born Francesc Fàbregas i Soler on May 4, 1987 in Vilassar de Mar, Barcelona, Catalonia to Francesc Fàbregas and Sr., Núria Soler, he grew up with one sister, Carlota Fabgregas. He began a relationship with Daniella Semaan, with whom he has three children. 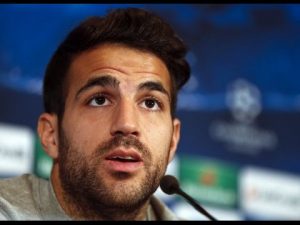 Cesc Fabregas Facts:
*He has supported FC Barcelona since childhood.
*He began his club football career with CE Mataró before being signed for Barcelona’s La Masia youth academy in 1997 at age ten.
*He spent 9 seasons with Arsenal before transferring to FC Barcelona.
*He signed for Chelsea from Barcelona on 12 June 2014, putting pen to paper on a five-year contract. He took the number four shirt.
*Follow him on Twitter, Facebook and Instagram.