Channing Tatum is an American actor, best known for playing the role of Duke in the action film G.I. Joe: The Rise of Cobra (2009), and its sequel, G.I. Joe: Retaliation (2013). He had his breakthrough in 2006 while portraying Tyler Gage in the dance film Step Up. His other well-known films include Coach Carter, The Vow, Magic Mike, 21 Jump Street, 22 Jump Street and Dear John. Born Channing Matthew Tatum on April 26, 1980 in Cullman, Alabama, to Kay and Glenn Tatum, he has a sister named Paige. He is mostly of English ancestry. He is a 1998 graduate of Tampa Catholic High School. He has been married to actress Jenna Dewan since July 11, 2009. They have a daughter, Everly Tatum. 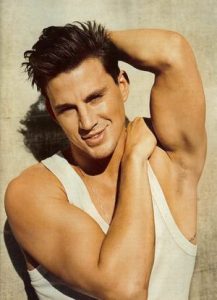 Channing Tatum Facts:
*He was born in Cullman, Alabama, and grew up in the bayous near the Pascagoula River.
*While growing up, he played soccer and football, ran track, and performed at martial art competitions.
*For his role in A Guide to Recognizing Your Saints, he won a Sundance Film Festival Special Jury Prize in 2006.
*He was ranked #17 in Glamour magazine’s list of “50 Sexiest Men” in 2013.
*He was chosen as the Sexiest Man Alive in 2012 by People magazine.
*He has a dog named Meeka.
*Visit his official website: www.channingtatumunwrapped.com
*Follow him on Twitter, YouTube, Facebook and Instagram.