Victoria Azarenka is a Belarusian professional tennis player who became number 1 in the world in January 2012. Turning professional in 2003, she has won two Australian Open singles titles (2012 and 2013). She is the first Belarusian woman to win a Grand Slam singles title. Born Victoria Fyodorovna Azarenka on July 31, 1989 in Minsk, Belarus, to Fedor and Alla Azarenka, she was introduced to tennis at the age of seven and turned professional in 2003. She has one older brother named Max. She was in a relationship with American musician Redfoo from 2012 to 2014. 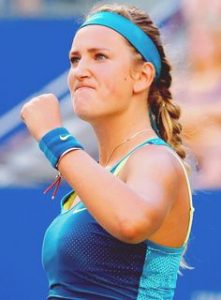 Victoria Azarenka Facts:
*She started hitting tennis balls at the age of seven and competed in her first professional match in 2003.
*She is fluent in English, Russian, Belarusian and a bit of French and Ukrainian.
*Her tennis idol is German former player Steffi Graf.
*She has a huge respect for the Swiss tennis player Roger Federer.
*Visit her official website: www.vikaazarenkatennis.com
*Follow her on Twitter, Facebook and Instagram.