Lucinda Williams is an American singer and songwriter, best known for the hit songs “Changed the Locks,” “Can’t Let Go” and “Passionate Kisses.” She has won three Grammy awards, and was considered the best songwriter in the United States by TIME magazine in 2002. She released her self-titled album, Lucinda Williams, in 1988. Her fifth studio album, Car Wheels on a Gravel Road, won a Grammy Award for Best Contemporary Folk Album, and received a nomination for Best Female Rock Vocal Performance for the single “Can’t Let Go”. Her tenth studio album, Blessed, debuted at number 15 on the Billboard 200. Born Lucinda Gayl Williams on January 26, 1953 in Lake Charles, Louisiana, she is the daughter of Lucille Day and Miller Williams. Her parents divorced in the mid-1960s. She has a sister Karyn Elizabeth and younger brother, Robert Miller. She began writing when she was 6 years old. She has been married to Tom Overby since September 18, 2009. She was previously married to Greg Sowders. 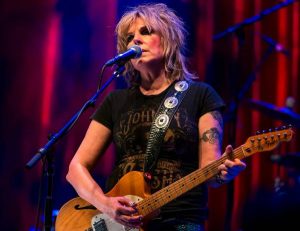 Lucinda Williams Facts:
*She grew up listening to blues, country and folk music.
*Time magazine named her “America’s best songwriter” in 2012.
*She was placed at #97 on VH1’s 100 Greatest Women of Rock N Roll.
*By age 12 she was playing guitar.
*Visit her official website: www.lucindawilliams.com
*Follow her on Twitter, Facebook and YouTube.