Charles Melton is an American actor and model. He is best known for his portrayal of Reggie Mantle on The CW television series Riverdale, and Daniel Bae in the 2019 film The Sun Is Also a Star. In 2015, Melton was cast as Mr. Wu in American Horror Story: Hotel. Born Charles Michael Melton on January 4, 1991 in Juneau, Alaska, USA, to parents Sukyong and Phil Melton, he grew up in Manhattan, Kansas. He belongs to Korean, Caucasian, and Cherokee descent. He attended Manhattan High School in Kansas. After graduating from Manhattan High School, Melton attended Kansas State University, where he played on the football team. He dropped out of college after two years to pursue acting and went to Los Angeles in 2014. In 2018, he started dating Camila Mendes. 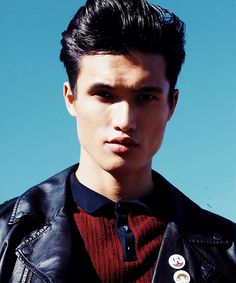 Charles Melton Facts:
*He was born on January 4, 1991 in Juneau, Alaska, USA.
*His ancestry includes Korean, Cherokee, and Caucasian.
*He was discovered at the Arts Showcase in Orlando, Florida.
*He made his debut walking for Park & Ronen and VLOVNew at New York Fashion Week in 2012.
*He was appeared on the cover of the Prestige magazine.
*Follow him on Instagram.