Charli D’Amelio is an American dancer and social media star, best known for her videos on the social media platform TikTok, where she has more than 125 million followers. She was a member of the collaborative TikTok group ‘The Hype House’ along with 18 others including her sister, Dixie D’Amelio. She also has over 40 million Instagram followers, 10 million YouTube subscribers, and over 5 million Twitter followers. She was called TikTok’s “reigning queen” by the New York Times in January 2020. In 2020, D’Amelio provided the voice of Tinker in the film StarDog and TurboCat. Born on May 1, 2004 in Norwalk, Connecticut, to parents Marc and Heidi, her older sister Dixie D’Amelio also a social media personality and singer. D’Amelio began her career on TikTok in the summer of 2019, uploading dance videos to trending songs on the platform. She was in a high profile relationship with fellow TikTok star Chase Hudson (xlilhuddy) from late 2019 until April 2020. 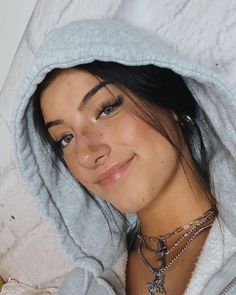 Charli D’Amelio Facts:
*She was born on May 1, 2004 in Norwalk, Connecticut, USA.
*She is the sister of Dixie D’Amelio.
*She began taking dance lessons at age 3.
*She first became active on Instagram in 2016.
*She started her TikTok channel in June 2019.
*She has amassed more than 125 million TikTok fans.
*She signed with the talent agency UTA in January 2020.
*She became the most-followed account on TikTok, surpassing previous most-followed individual, Loren Gray, on March 25, 2020.
*She collaborated on YouTube with actor Noah Schnapp on March 27, 2020.
*Follow her on Twitter, TikTok, YouTube, Facebook and Instagram.