Charlie Heaton is an English actor known for his role as Jonathan Byers in the Netflix supernatural drama series Stranger Things. His other movie credits include As You Are, Urban & the Shed Crew, and Shut In. Charlie was born on February 6, 1994 as Charlie Ross Heaton in Bridlington, East Riding of Yorkshire, England. Moving to London to be with his father when he was 16, Charlie joined Comanechi for the band’s second album and toured the world for almost 18 months. 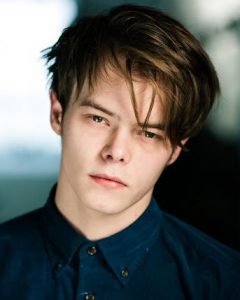 Charlie Heaton Facts:
*He moved to London when he was 16 years old.
*He worked at a bar to support his musical endeavors with Comanechi.
*He was the drummer of a noise-rock band called Comanechi.
*He did a commercial for a Swiss insurance company.
*Follow him on Twitter and Instagram.