Chester Bennington was an American singer and songwriter who was best known as the lead vocalist of the legendary rock band Linkin Park. He was also lead singer of Stone Temple Pilots and Dead by Sunrise from 2013 to 2015. He had released six studio albums with Linkin Park and one studio album with Dead by Sunrise. Bennington was born Chester Charles Bennington in Phoenix, Arizona, to Susan Elaine, a nurse, and Lee Russell Bennington, a police detective. His parents separated when he was 11 years old. On July 20, 2017, Bennington was found dead in his home in Palos Verdes Estates, California, from suicide by hanging. He was 41. 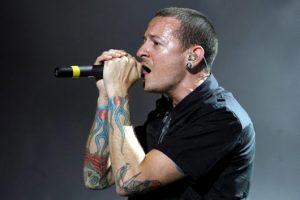 Chester Bennington Education:
He attended Centennial High School at the beginning of his freshman year.
Then he went to Greenway High School where he started his first band, Grey Daze.
He graduated from Washington High School in 1994.

Chester Bennington Facts:
*His parents divorced when he was 11 years old.
*One of the lead singers to the band Linkin Park
*His single with Linkin Park “Numb” was certified Platinum in 2003.
*As a teenager, he took to the habit of drugs to deal with emotional distress and worked many jobs in order to pay for his drug habit.
*He was in a relationship with Elka Brand with whom he had a child Jamie. Later, he adopted her son, Isaiah