Charlize Theron is an American-South African actress and film producer. She is best known for her role as Aileen Wuornos in the 2003 film Monster, for which she won the Academy Award, Silver Bear, Golden Globe Award, and Screen Actors Guild Award for Best Actress. Her other notable film credits include The Devil’s Advocate, North Country, Snow White and the Huntsman, Mighty Joe Young, and The Cider House Rules. Born on August 7, 1975, in Benoni, Gauteng, South Africa, she is the only child of Gerda Theron and Charles Jacobus Theron. She became fashion model at 14, and won a modeling contract when she was 16. She was in a relationship with actor Sean Penn from 2014 to 2015. She has two adopted children: a son, Jackson Theron and a daughter, August Theron. 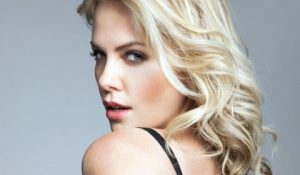 Charlize Theron Facts:
*She is the only child of her parents.
*She became fashion model when she was 14.
*Besides her native Afrikaans language, she speaks English.
*In May 2007, she became the citizen of United States of America.
*People Magazine named her one of the top 50 Most Beautiful People in the World in 2000.
*She ranked #15 in 2006 in FHM magazine’s “100 Sexiest Women in the World” supplement.
*In 2012, she was named “Sexiest Actress” by Victoria’s Secret What Is Sexy list.
*Tom Hanks is her favorite actor.
*Visit her official website: www.charlizeafricaoutreach.org
*Follow her on Twitter, Facebook and Instagram.