Kristen Wiig is an American actress, comedian, producer, and writer. She is best known by the public for her work on NBC’s Saturday Night Live. She is also known for film roles in Bridesmaids, Knocked Up, The Martian, The Skeleton Twins, The Secret Life of Walter Mitty, and Ghostbusters. She has also done voice work in How to Train Your Dragon and Despicable Me. Born Kristen Carroll Wiig on August 22, 1973, in Canandaigua, New York, to Laurie and Jon Wiig, she grew up in Lancaster, Pennsylvania, and Rochester, New York. She is of Norwegian and Irish descent on her father’s side, and of English and Scottish descent on her mother’s side. She graduated from Brighton High School. She debuted on Saturday Night Live in 2005. She was married to Hayes Hargrove from 2005 to 2009. 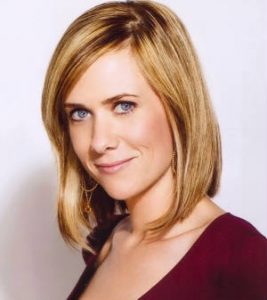 Kristen Wiig Facts:
*She was born in Canandaigua, New York, and grew up in Lancaster, Pennsylvania, and Rochester, New York.
*Her parents divorced when she was 9 years old.
*Time Magazine named her one of the top 100 Most Influential People in the World in 2012.
*Visit her official website: www.kristenwiig.com