Charlotte Jackson is an English journalist and television host who works as a presenter for Sky Sports News. She joined Sky Sports News in August 2009. Prior to joining Sky Sports, she was the presenter on Setanta Sports News. Jackson was also a singer and backing vocalist and was a backing vocalist for Tony Christie for a TV appearance of his hit, “Is This the Way to Amarillo”. She hosted the Barnardos Young Supporters Concert from 2005–2009, and participated in Catfight in 2007, a boxing match in Hammersmith Palais. Born Charlotte Louise Jackson on June 29, 1979 in Portsmouth, Hampshire, England, she played lacrosse and tennis for Hampshire, while her mother played lacrosse for England. Jackson married former Sunderland A.F.C and Wales FC manager Chris Coleman on May 16, 2015. They have two children. She also has four step-children. 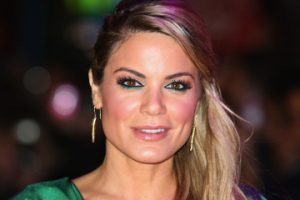 Charlotte Jackson Facts:
*She was born on June 29, 1979 in Portsmouth, Hampshire, England, UK.
*Her family originated from Liverpool.
*She played lacrosse and tennis for Hampshire.
*She joined Setanta Sports News in 2007.
*She joined Sky Sports News in August 2009.
*She hosted the 2009 FIFA World Player of the Year Awards Ceremony.
*She was a contestant in ITV’s celebrity diving show Splash! in 2013.
*She enjoys playing golf and doing modeling.
*She is an avid supporter of English football club Liverpool FC.
*Follow her on Instagram.