Sonia Ben Ammar is a French-Tunisian actress, singer and fashion model who signed with the prestigious IMG modeling agency in 2016. She has appeared in campaigns for many important fashion houses such as Dolce & Gabbana, Miu Miu, Carolina Herrera, Top Shop, Nina Ricci and Chanel. She has also appeared on the cover of fashion magazines such as Vogue, Vanity Fair, Harper’s Bazar, Love, l’Officiel and Elle. She starred in 2013 French film Jappeloup and on French Broadway, and once took part in French talent show L’École Des Fans. She released her debut song Ocean in 2018. Born on February 19, 1999 in Paris, France, to Tunisian-born film producer Tarak Ben Ammar and Polish actress Beata Ben Ammar, she has two brothers, Tarak Ben Ammar Jr. and Neil Ben Ammar. She voiced the role of Fairy in the movie Winx Club at age 8. She graduated from the American School of Paris and attends the University of Southern California from fall 2017. From 2015 to 2016, she was romantically linked to Brooklyn Beckham. In 2018, she started dating Anwar Hadid. 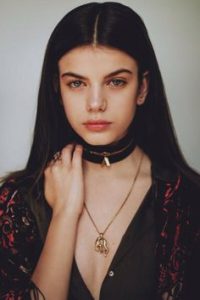 Sonia Ben Ammar Facts:
*She was born on February 19, 1999 in Paris, France.
*Her father, Tarak Ben Ammar, is a film producer and and her mother, Beata, is an actress.
*While growing up, she studied dance, singing, piano and theater.
*She is the face of Dolce and Gabbana.
*She was featured on the music video of Calvin Harris and Sam Smith “Promises”.
*She has a pet dog named Mia.
*Visit her official website: www.itsnotsonia.com
*Follow her on Twitter, YouTube, Facebook and Instagram.