Charlotte McKinney is an American model and actress who first achieved fame as an Instagram star. McKinney became much publicized with her appearance in a Carl’s Jr. commercial which aired regionally during Super Bowl XLIX in 2015. In 2015, she competed on season 20 of Dancing with the Stars. She was partnered with Keoikantse Motsepe. She appeared as Missy in the 2015 film Joe Dirt 2: Beautiful Loser. She also appeared in the 2017 film adaptation of Baywatch and the remake of Flatliners. Born Charlotte Ann McKinney on August 6, 1993 in Orlando, Florida, to parents Susan and Terry McKinney, she has an older sister named Garland. She dropped out of high school at age 17 to pursue a modelling career. McKinney is with the height 5 feet 7½ inches in tall. She wears a size 8.5 shoe and her zodiac sign is Leo. 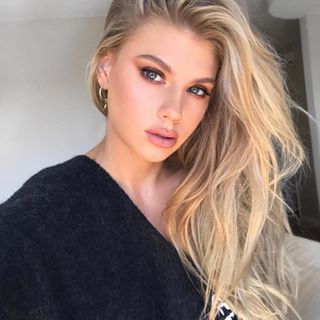 Charlotte McKinney Facts:
*She was born on August 6, 1993 in Orlando, Florida, USA.
*She has an older sister named Garland Marie McKinney.
*She dropped out of high school when she was 17.
*She signed with Wilhelmina Models
*She has dyslexia.
*Visit her official website: www.charlottemckinney.co
*Follow her on Twitter, Facebook and Instagram.