Zimbabwean national Chelsy Davy who rose to international fame as Prince Harry’s girlfriend. She was the on-off girlfriend of Prince Harry from late 2004 to January 2009. They met in early 2004 while Davy was a boarder at Stowe School. She announced the end of the relationship on Facebook. Born on October 13, 1985 in Bulawayo, Zimbabwe, to Charles Davy and Beverley Donald Davy, Chelsy Yvonne Davy grew up at her family’s homestead in the Lemco Safari Area. She has a younger brother Shaun Davy. She earned her undergraduate degree in economics at the University of Cape Town, then went on to earn her law degree at the University of Leeds. 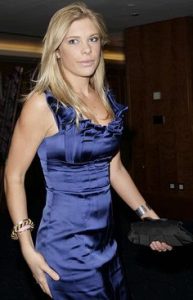 Chelsy Davy Facts:
*During her childhood, she wanted to become a model.
*She was named in the 2008 FHM list of 100 Sexiest Women in the World.
*In July 2016, she started a jewellery Brand, Aya.