American singer and actress who first achieved fame in 1965 as one half of the pop/rock duo ‘Sonny & Cher’ whose song “I Got You Babe” peaked at number one on the US and UK charts. As a solo artist, Cher has released 25 albums, and has 22 Billboard Top 40 entries over her career. Her 1999 hit single “Believe” was ranked #60 on VH1’s 100 Greatest Dance Songs. Cher won a Grammy Award in 2000 for the song “Believe” and an Emmy Award in 2003 for a special on her farewell concert tour. Also a successful actress, Cher won an Oscar for Best Actress for her role in the romantic comedy Moonstruck in 1987. Born Cherilyn Sarkisian on May 20, 1946 in El Centro, California, to parents Georgia Holt and John Sarkisian, she has a sister, Georganne LaPiere. She was married to Sonny Bono from 1969 to 1975 and Gregg Allman from 1975 to 1979. She is the mother of Chaz Bono with Sonny Bono and Elijah Allman with Gregg Allman. 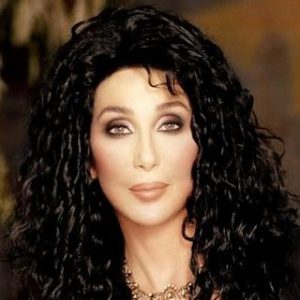 Cher Facts:
*She was born on May 20, 1946 in El Centro, California, USA.
*Her mother is singer-songwriter and actress Georgia Holt.
*Her parents married and divorced three times.
*She is known as the Goddess of Pop.
*She studied acting with Jeff Corey before entering the music industry.
*She won an Academy Award for her role in ‘Moonstruck.’
*She holds the record for oldest female artist with a #1 hit (“Believe”).
*She won Billboard’s Artist of the Year Award in 2002.
*She is the only certified female performer in music history to have had a US #1 single in the 1960s, 1970s, 1980s and 1990s.
*She was diagnosed with dyslexia at the age of 30.
*She is good friends with Meryl Streep.
*She is a big fan of Katharine Hepburn.
*From 1984 to 1985, she was engaged to television producer Joshua Donen.
*Visit her official website: www.cher.com
*Follow her on Twitter, YouTube, Facebook and Instagram.