Chloe Grace Moretz is an American actress and model. She gained international attention with her performance of Mindy Macready (Hit-Girl) in the superhero film Kick-Ass and its 2013 sequel Kick-Ass 2. She has also starred in such films as Let Me In, (500) Days of Summer, Hugo, Dark Shadows, Carrie, Clouds of Sils Maria, If I Stay, The Equalizer, The 5th Wave, Neighbors 2: Sorority Rising, The Miseducation of Cameron Post, and Suspiria. Born on February 10, 1997 in Atlanta, Georgia, to parents McCoy Moretz, a plastic surgeon and Teri Duke Moretz, a nurse, she grew up in Cartersville, Georgia. She has four older brothers: Trevor, Colin, Brandon, and Ethan. She began her acting career in 2004 at the age of seven, and her first award nomination came the following year for The Amityville Horror. 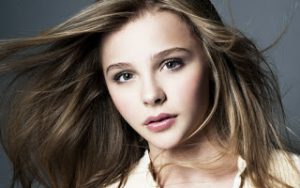 Chloe Grace Moretz Facts:
*She was born on February 10, 1997 in Atlanta, Georgia.
*She began her acting career at seven.
*She modeled before she started her acting career.
*One of her favorite actresses is Audrey Hepburn.
*She has a pet cat named Zoe.
*Follow her on Twitter and Instagram.