Chris Martin is an English musician, singer and songwriter best known as the co-founder and lead vocalist of the pop rock band Coldplay, whose first album, Parachutes, has sold in excess of 5 million copies worldwide, and won a Grammy. Born Christopher Anthony John Martin in Whitestone, Devon, United Kingdom, he is the son of Anthony Martin, a retired accountant, and Alison Martin, a music teacher. He has four younger siblings. He married actress Gwyneth Paltrow in 2003, and the couple had a daughter and a son before getting divorced in 2016. 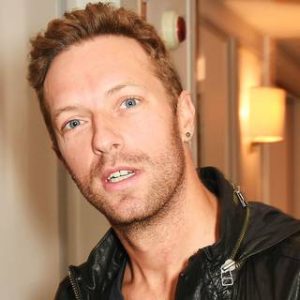 Chris Martin Facts:
*He is the oldest of five children.
*He is a vegetarian.
*He didn’t lose his virginity until he was 22 due to some religious issues.
*His song “Fix You” was his wife Gwyneth Paltrow.
*He is a big fan of Echo & The Bunnymen.
*He was voted as “World’s Sexiest Vegetarian” by PETA.