Actress Jaimie Alexander is famous for her roles in the TV series Kyle XY, the 2011 superhero film Thor and Agents of S.H.I.E.L.D. Jaimie was born as Jaimie Lauren Tarbush in Greenville, South Carolina, but moved with her family to Grapevine, Texas, when she was four years old. She is the daughter of Nita Carol Tarbush and David Curtis Tarbush, and has three older brothers and a younger brother. She belongs to English and German descent. In 2015, she got engaged to actor Peter Facinelli, but they later split. 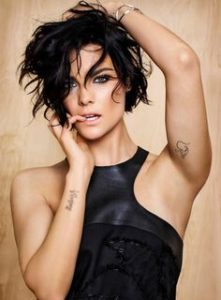 Jaimie Alexander Facts:
*She is the only girl in a family of five children.
*She moved to Grapevine, Texas with her family At age 4.
*She was placed number 76 on Maxim magazine’s Hot 100 Women of 2014 list.
*Follow her on Twitter, Facebook and Instagram.