Chris Paul is an American professional basketball player who currently plays point guard for the Oklahoma City Thunder of the National Basketball Association (NBA). He is a ten-time NBA All-Star and two-time Olympic Gold Medalist. Born Christopher Emmanuel Paul on May 6, 1985 in Winston-Salem, North Carolina, to parents Charles and Robin Paul, he attended West Forsyth High School in Clemmons, North Carolina. He has been married to Jada Crawley since September 10, 2011. They have two children; a son named Christopher II and a daughter named Camryn. 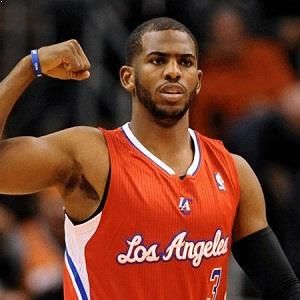 Chris Paul Facts:
*He was born on May 6, 1985 in Winston-Salem, North Carolina, USA.
*His full name is Christopher Emmanuel Paul.
*He played college basketball at Wake Forest University.
*He was selected 4th overall by the Hornets in the 2005 NBA Draft.
*In 2006, Paul was named NBA Rookie of the Year.
*He made his All-Star debut during the 2007-2008 season.
*He played six seasons with the New Orleans Hornets (2005–2011).
*He has also played for the Los Angeles Clippers (2011-2017) and Houston Rockets (2017–2019).
*He won an Olympic gold medal as part of the United States basketball team in 2008.
*He was named the NBA All-Star Game MVP in 2013.
*He is part owner of the Winston-Salem Dash and is the co-founder of Go Hoop Day.
*He is good friends with Reggie Bush.
*Visit his official website: www.chrispaul3.com
*Follow him on Twitter, Facebook and Instagram.