Chris Stapleton is an American country singer and songwriter as well as a guitarist. He spent a decade writing over 150 songs for other artists like Kenny Chesney, George Strait, Darius Rucker and Luke Bryan. His debut studio album, Traveller, was released in 2015, which achieved remarkable success, reaching at number two on the U.S. country charts. He was the frontman for the Grammy-nominated bluegrass band The SteelDrivers from 2008 to 2010. Born Christopher Alvin Stapleton on April 15, 1978 in Lexington, Kentucky, USA, he grew up in Paintsville, Kentucky and moved to Nashville, Tennessee in 2001. He has two siblings; an older brother and younger sister. Since October 2007, he has been married to Morgane Stapleton with whom he has two children. After graduating from Johnson Central High School, he studied engineering at Vanderbilt University, but dropped out after a year. 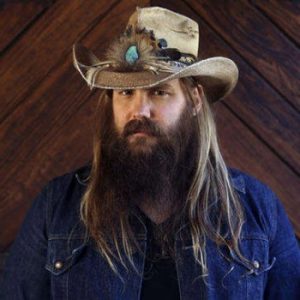