Fernando Colunga is a Mexican actor, primarily known for starring in Mexican telenovelas. He is best known for roles such as Luis Fernando de la Vega in María la del Barrio, Luis Gustavo Uribe Del Valle in Nunca te olvidaré, José Armando Peñarreal De Velasco in Esmeralda, and Carlos Daniel Bracho in La usurpadora. He played José Miguel Montesinos in the 2010 telenovela Soy tu dueña. Born in Mexico City, Mexico, on March 3, 1966, to Fernando Colunga and Margarita Olivares, Fernando Colunga Olivares is a only child with no siblings. He enrolled at University of Mexico to study civil engineering. He has been in a relationship with actress Blanca Soto since 2013. He was previously in a relationship with Yuri (1992-1993), Thalía (1995-1996), and Aracely Arámbula (2000-2001). 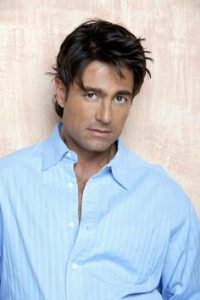