Christian Bale is a British actor. He is most famous for his portrayal of Bruce Wayne/Batman in the Batman trilogy. He can also be recognized for his roles in American Psycho, The Fighter and American Hustle. For his role as Dicky Eklund in The Fighter, he won an Academy Award for Best Supporting Actor. Born Christian Charles Philip Bale on January 30, 1974 in Haverfordwest, Pembrokeshire, Wales, to David and Jenny Bale, he has three sisters, Louise Bale, Erin Bale and Sharon Bale. He first gained attention with his role in Steven Spielberg’s Empire of the Sun. He married Sibi Blazic in 2000. They have two children: daughter Emmaline, and son Joseph. 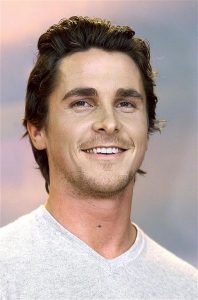 Christian Bale Facts:
*He is the son of David and Jenny Bale.
*He spent his growing years in England, Portugal, and the United States.
*His first film role was in the 1986 TV film Anastasia: The Mystery of Anna.
*He won an Academy Award for Best Supporting Actor for his portrayal as Dicky Eklund in The Fighter.
*He replaced Leonardo DiCaprio for the film American Psycho.