Salman Khan is an Indian film actor, producer, singer and television personality, who appears in Bollywood films. One of Indian’s most popular and highest-paid actors, Salman is the recipient of several accolades, including two National Film Awards and two Filmfare Awards. He made his film debut in 1988 as Vicky Bhandari in Biwi Ho to Aisi, following which he had his breakthrough role in blockbuster romance Maine Pyar Kiya, for which he earned a nomination for the Filmfare Award for Best Actor. Other popular movies Khan has acted in are Hum Aapke Hain Koun..!, Karan Arjun, Pyaar Kiya To Darna Kya, Kuch Kuch Hota Hai, Hum Dil De Chuke Sanam, Hum Saath-Saath Hain, Tere Naam, Garv, Mujhse Shaadi Karogi, Dabangg, Bodyguard, Ek Tha Tiger and Bajrangi Bhaijaan. He made his television debut by hosting two seasons of the game show 10 Ka Dum (2008–09). Born Abdul Rashid Salim Salman Khan on December 27, 1965 in Indore, Madhya Pradesh, to Salim Khan and Sushila Charak, his stepmother is Helen, a former actress. He has two brothers, Arbaaz Khan and Sohail Khan and two sisters, Alvira Khan Agnihotri and Atul Agnihotri. He dated Bollywood actress Aishwarya Rai in 1999. 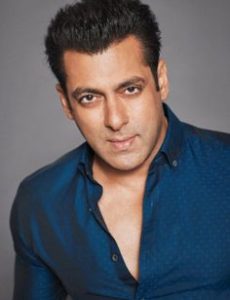 Salman Khan Facts:
*He is the son of the legendary writer Salim Khan.
*He won the Filmfare Award for Best Supporting Actor for his role in Kuch Kuch Hota Hai.
*He was once in a highly publicized relationship with Aishwarya Bachchan.
*He was voted 7th best-looking man in the world by People Magazine.
*Sylvester Stallone is his favorite actor.
*His all time favorite actress is Hema Malini.
*He is an excellent painter.
*He has his own non-profit charitable foundation, Being human – The Salman Khan Foundation, which helps in collecting funds for charity works.
*He was sentenced to a five-year imprisonment on 6 May 2015 from running over 5 people, killing 1, with his car.
*Follow him on Twitter, YouTube, Google+, Facebook and Instagram.