Christiane Maybach was a German actress, best remembered as original cast member of daily soap opera Unter uns (1994). She was appeared in many films, notably Two Bavarians in the Harem, A Study in Terror, Z7 Operation Rembrandt, Gaslicht, The Girl Without Pyjamas, and All People Will Be Brothers. Born Uschi Müller on March 14, 1932 in Berlin, Germany, she graduated from high school and attended the drama school of the Schiller Theater in Berlin beginning in 1956. She worked on the stage before she began a career in film. She died of cancer on April 12, 2006 at the age of 74. She was unmarried and childless. 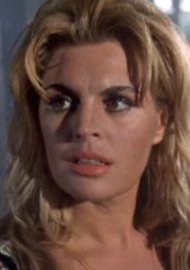 Christiane Maybach Education:
She graduated from high school and attended the drama school of the Schiller Theater in Berlin beginning in 1956.

Christiane Maybach Facts:
*She was born on March 14, 1932 in Berlin, Germany.
*She worked on the stage before becoming a film actress.
*As she resembled Marilyn Monroe, she became a German sex symbol in the early 1960s.
*She lived with her cat “Gigi” in Berlin and Cologne until her death.
*She died in Cologne, North Rhine-Westphalia, Germany on April 12, 2006.