Christina Milian is an American singer, songwriter and actress. Milian released her self-titled debut album, Christina Milian, in 2001, which featured the singles “AM to PM” and “When You Look at Me”; both peaked in the top three on the UK Singles Chart. Milian’s second album, It’s About Time (2004), provided her first major US hit “Dip It Low”, which reached number two in the UK and number five in the US, and was certified Gold by the RIAA for digital sales. As an actress, Milian has starred in the films Love Don’t Cost a Thing, Be Cool, Pulse, Bring It On: Fight to the Finish, and Christmas Cupid. From 2015 to 2016, she starred as in the sitcom Grandfathered. Milian earned an Imagen Award in 2013 for her role in A Snow Globe Christmas. Born Christine Flores on September 26, 1981 in Jersey City, New Jersey, to Cuban parents Carmen Milian and Don Flores, she was raised in Waldorf, Maryland. She has two younger sisters, Danielle and Elizabeth. She graduated from Westlake high school in Waldorf, Maryland. At age 19, Milian signed a contract with Murder Inc. Records. She married The-Dream in 2009, and the couple had a daughter named Violet in 2010 before getting divorced in 2011. Milian began dating M. Pokora in 2017. Their son Isaiah was born on January 20, 2020. 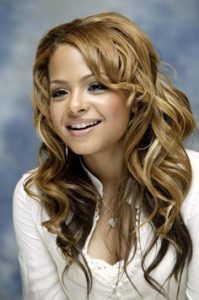 Christina Milian Facts:
*She was born on September 26, 1981 in Jersey City, New Jersey, USA.
*She is the oldest of three sisters.
*She began her music career in 2000.
*Her hit single “AM to PM”, reached #27 on the Billboard Hot 100, in 2001.
*She changed her last name from Flores to Milian.
*Her first lead role was in the 2003 teen comedy Love Don’t Cost a Thing.
*She dated comedian Nick Cannon from 2003 to 2005.
*She was engaged to actor Eric West from 2005 to 2006.
*She is close friends with Karrueche Tran.
*She is a big fan of comic books.
*She has a cat named Alex.
*Visit her official website: www.christinamilian.com
*Follow her on Twitter, YouTube, Facebook and Instagram.