Renee Alway is an American fashion model. She is best known for being a contestant of America’s Next Top Model, Cycle 8. She is also known for being the runner-up on the modeling competition series Modelville. As an actress, she appeared in the CBS original series Shark. Born Renee Diane Alway on April 29, 1986 in Maui, Hawaii, she started her modeling career at the age of 13 and modeled in New York City, Europe and Japan and appeared in Seventeen and Italian Vogue. She also appeared in ads for Delia’s. She has been married to Jason DeWitt since 2006. The couple has three children. 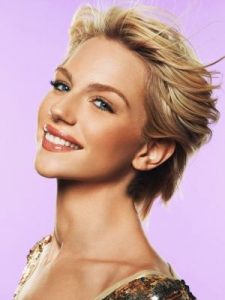 Renee Alway Facts:
*She was born on April 29, 1986 in Maui, Hawaii, USA.
*She signed with Next Model Management’s L.A division in May 2008.
*She placed third on the 8th cycle of “America’s Next Top Model”.
*Before AMTN, Renee was a stay-at-home mother.
*In June 2013, Alway was arrested for multiple offenses, including drug possession, burglary, committing a felony while on bail, theft, and fraud.