Cindy Williams is an American actress. She is best known for her portrayal of Shirley Feeney on the sitcom Laverne & Shirley. She also played Laurie Henderson in George Lucas’s American Graffiti (1973). Her memoir Shirley, I Jest! (co-written with Dave Smitherman) was published in 2015. Born Cynthia Jane Williams on August 22, 1947 in Van Nuys, California, to Francesca Bellini and Beachard Williams, she has a sister, Carol Ann Williams. She graduated in 1965 from Birmingham High School in Van Nuys, CA. Financier Michael Milken, actress Sally Field, and talent agent Michael Ovitz were her classmates. She also attended Los Angeles City College, where she majored in theatre arts. Cindy began her professional career appearing commercials, which included Foster Grant sunglasses and TWA. She was married to Bill Hudson from 1982 to 2000. They have two children: a daughter named Emily and a son named Zachary. 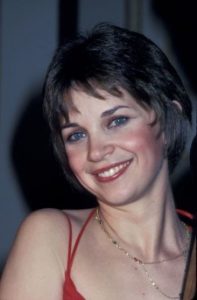 Cindy Williams Facts:
*She was born on August 22, 1947 in Van Nuys, California, USA.
*She is a 1965 graduate of Birmingham High School.
*From 1976 to 1983, she starred in the series Laverne and Shirley as Shirley Feeney.
*Her favorite actress is Debbie Reynolds.
*Visit her official website: www.thisiscindywilliams.com
*Follow her on Twitter and Facebook.