Cita Rahayu, better known by her stage name Cita Citata, is an Indonesian music artist and actress who rose to fame in 2014 with her single titled “Sakitnya Tuh Disini”, which appeared in the soap opera “Diam-Diam Suka: Cinta Lama Bersemi Kembali”. Due to the song’s popularity, she also played a role within the soap opera. She was born Cita Rahayu on August 14, 1994 in Bandung, West Java, Indonesia to Herdi Suwito and Otih Juariah. She has a sister named Mila Juwinda. She was married to Galih Purnama from 2012 to 2015. 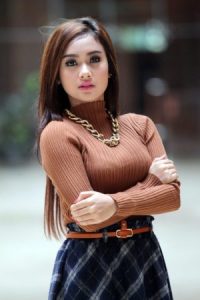 Cita Citata Facts:
*Since high school, she began to sing pop.
*She started her career as a jazz singer.
*At the time of grade 4 elementary school, she often sang dangdut at wedding reception.
*She released a single titled “Sakitnya Tuh Disini”.
*Her song “Sakitnya Tuh Disini” won an award for The Most Famous Soap Opera Soundtrack at the 2014 SCTV awards.
*Follow her on Instagram.