Kristanna Loken is an American actress and model, born in Ghent, New York, to Rande and Merlin “Chris” Loken. She is of half Norwegian and half German descent. She has a sister, Tanya. Born as Kristanna Sommer Løken in October 8, 1979, she grew up on her parents’ fruit farm in Upstate New York, and began modeling at the age of fifteen. Kristanna is best known for her appearances in the films Terminator 3: Rise of the Machines, BloodRayne and Bounty Killer and on the TV series Painkiller Jane, The L Word and Burn Notice. She was married to Noah Danby from 2008-2009. In 2015, she began dating Antonio Villaraigosa. 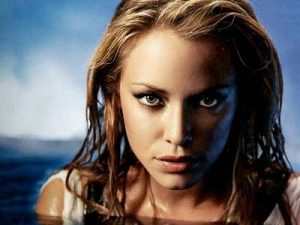 Kristanna Loken Facts:
*She began modeling at the age of 15.
*Her sister Tanya, is 16 years her senior.
*She was ranked behind Shania Twain and Christina Aguilera on the third spot on the Maxim magazine’s Hot 100 Women list in 2003.
*She has a dog named Buster.
*She is a vegetarian and an equestrian.
*She was named #70 in FHM magazine’s “100 Sexiest Women in the World 2006” supplement.
*Follow her on Twitter, Facebook, Google+, YouTube, and Instagram.