Anne Curtis is a Filipino-Australian film and television actress, tv host, recording artist, and VJ. She is known for her roles in television series such as Kailangan Ko’y Ikaw, Green Rose, Dyosa, The Wedding, Hiram, and Kampanerang Kuba. She is also known for her roles in film 2011’s No Other Woman, 2010’s Babe, I Love You, 2012’s A Secret Affair, 2008’s Baler, and 2010’s In Your Eyes. The eldest of five children, Anne Curtis was born in Yarrawonga, Victoria, Australia. She is the daughter of Australian lawyer James Curtis Smith and Filipina Carmencita Ojales. 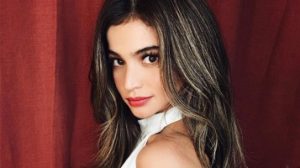 Anne Curtis Facts:
*She has dual Filipino-Australian citizenship.
*Her younger sister, Jasmine, is also an actress.
*She reveived ‘FAMAS Award for Best Actress’ for her role in the 2011’s film ‘No Other Woman.’
*She was 13 on her vacation in the Philippines spotted by a talent scout of a fastfood chain, Jollibee.
*She is the first Filipino celebrity who’s reached 1 million followers in her Twitter account.
*Follow her on Twitter, Facebook and Instagram.