Claire Foy is a British actress. She is best known for her roles as Amy Dorrit in the BBC series Little Dorrit, and as Queen Elizabeth II in the Netflix series The Crown, for which she earned a Golden Globe Award in 2017. She portrayed Anne Boleyn in the BBC2 series, Wolf Hall (2015), and played Kate in the NBC series Crossbones. Born Claire Elizabeth Foy on April 16, 1984 in Stockport, England, to parents Caroline and David Foy, she was raised in Manchester, Leeds and Buckinghamshire. She has two older siblings, a sister named Gemma, and a brother, Robert. She attended Aylesbury High School, and studied drama and film studies at Liverpool John Moores University. She then did a one year course at the Oxford School of Drama, and graduated in 2007. She made her screen debut in the 2008 series Being Human. She married Stephen Campbell Moore in 2014, and the couple had a daughter named Ivy Rose in 2015 before getting divorced in 2018. 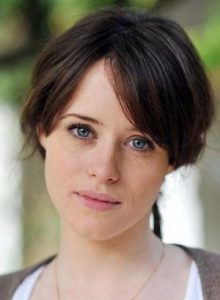 Claire Foy Facts:
*She was born in Stockport, England on April 16, 1984.
*She is the youngest of three children.
*She is of Irish descent on her mother’s side.
*Her parents divorced when she was eight years old.
*During her childhood, she wanted to become a ballet dancer