Rapper who’s debut studio album, Luv Is Rage 2 (2017), debuted at number one on the US Billboard 200, and was subsequently certified platinum. He collaborated with the music group, Migos for their hit, Bad and Boujee, which reached #1 on the US Billboard Hot 100. He has also worked with such leading music artists as Wiz Khalifa, Young Thug, and Gucci Mane. Born Symere Woods on July 31, 1994 in Philadelphia, Pennsylvania, he first gained fame for his mixtape Luv Is Rage, which was released on October 30, 2015. It topped at number 92 on Billboard Hot 100. He was previously in a relationship with model Brittany Byrd. 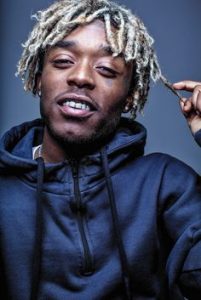 Lil Uzi Vert Facts:
*He was born in Philadelphia, Pennsylvania on July 31, 1994.
*He was discovered by producer and DJ Don Cannon.
*He released his first mixtape, The Real Uzi in August of 2014.
*He worked as a stock person at the Bottom Dollar store.
*Visit his official website: www.liluziofficial.com
*Follow him on Twitter, YouTube, Facebook and Instagram.