Reality TV personality and model Claudia Jordan was born Claudia Angela Jordan on April 12, 1973 in Providence, Rhode Island, the daughter of Italian mother and an African-American father. Claudia started her television career on Deal or No Deal as a model. She is famous for competing on seasons 2 and 6 of Celebrity Apprentice. She was married to Datari Turner from 2009 to 2010. 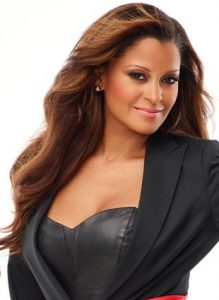 Relationships / Affairs / Boyfriend:
She was in a relationship with Dwight Freeney, Maurice Greene, LM Garrett, Kevin Hart, and Chico DeBarge.

Claudia Jordan Facts:
*She is of Italian descent on her mother’s side, and of African-American on her father’s side.
*She began her television career as a model on Deal or No Deal.
*She represented Rhode Island as Miss Teen USA in 1991 and Miss USA in 1997.
*She joined The Real Housewives of Atlanta in 2014 and The Next :15 in 2016.
*She co-hosted 2009 Miss Universe Pageant with Billy Bush.
*Follow Jordan on Twitter, Facebook and Instagram.