Ahman Green is a former pro football running back who is the all-time leading rusher with 8,322 yards for the Green Bay Packers. He has played twelve seasons in the National Football League. Green was born on February 16, 1977 in Omaha, Nebraska, USA as Ahman Rashad Green. He married to Heather Walters in 2004. He was previously married to Shalynn Vance from 2000 to 2003. He has two daughters, Ahmani and Myahni. 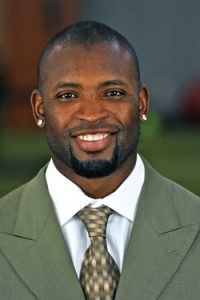 Ahman Green Facts:
*He was named the NFC Offensive Player of the Year in 2003.
*He won two national championships as a member of the University of Nebraska.
*He was a high school All-American selection and state ‘Player of the Year’ as a senior.
*He played for the Seahawks and Texans and retired with 9,205 career rushing yards and 60 touchdowns.
*He was arrested on suspicion of child abuse On June 26, 2017.
*Follow Ahman Green on Twitter and Facebook.